How beer proved the theory of evolution and destroyed god!

Beer! The beverage of the gods. For millennia it has been drunk to get close to the spirit world. Medieval monks drank it to get closer to god. Vikings drank it before battle, glorifying the day they would fight, eat and drink in Valhalla. The Romans made it. The Egyptians perfected it by their standards, the Babylonians was the “first” and their hymn to Ninkasi, the goddess of brewing, also is the first written recipe for beer in recorded history written some 4000 years ago, though brewing goes even further back in time.

Grain was the first domesticated crop that started the farming process somewhere between 10 000 to 15 000 years ago. Along with carefully planned agriculture came the importance of information; when to sow, harvest and store seeds for next year’s crop. The written language was a result of the need to store this information. Symbols came first, then more complex letters and sentences. With the written language came knowledge and wisdom, math, history, economy. The folklore, myths and the mysteries of nature and the universe could also be written down, even if they were mostly wrong. Grain laid the very foundation for all civilizations that ever was, and ever will be. The hunters spear became a finger in the sand, a chisel against hard rock, a knife carving wood, a pen against paper, a binary code. But how do we know this? Where does this information come from? From the written language off course, and through different translations of historic documents, paintings, hieroglyphs and archaeological findings we can track human civilization back to the very beginning of it. Using empirical evidence (knowledge acquired by means of observation or experimentation), the history reveals itself separating myth from fact (though this can sometimes be a hard nut to crack, and especially when religion is involved.)

So, back to beer. The ancients might have known how to make beer and wine, but they did not understand the process of which turns liquid bread into an alcoholic beverage. Their take on it was to keep the liquid at a right temperature, use grains that were ready to sprout and then time would do the rest. Actually up until recent history we knew nothing of the process which takes place on a microscopic scale in the fermenter. Not until the French emperor Napoleon III (nephew to N. Bonaparte) asked the famous chemist and fellow chees eater Lois Pasteur if he could find out why some wines would be spoiled and taste worse than others. To make a short story even shorter; what unveiled itself when Pasteur looked into the microscope was a new world of microorganisms that would change biology and our look on the natural world completely. This was back in the mid-19th century, and it didn`t take long before wine and beer and breweries could produce a better quality product with a more stable production. It not only had a huge impact on the breweries, but also on medical microbiology which have changed how humans live, living longer and healthier lives.

What Pasteur discovered was yeast; a unicellular microorganism that uses organic compounds as a source of nutrition, and do not need sunlight to grow. Saccharomyces Cerevisiae (ale yeast), being the yeast we are talking about here, turns hexose and disaccharide sugars into carbon dioxide and alcohol, among other things. Saccharomyces Pastorianus (lager yeast) is the bottom fermenting yeast, yet the difference between those two are S.P`s ability to turn certain disaccharides into more fermentable monosaccharaides. Other than that they are more or less the same species of yeast. There are of course other types in which I`m not going further into. Several yeasts strains, in particular Saccharomyces Cerevisiae (ale yeast), have been widely used in cell biology and genetics. This is largely because S. C. is a simple eukaryotic cell (all multicellular organisms are eukaryotes, including humans), and is used for the study of fundamental cellular processes such as the cell cycle, replication, recombination, cell division, and metabolism, in short terms how the cell works, but most importantly it is also the first eukaryote to have its entire genome fully sequenced as part of the Genome Project. Considering it consisting of 12 million base pairs, the project took years, but was extremely important finally leading to the Human Genome Project identifying and mapping the approximately 20,000–25,000 genes of the human genome.

Darwin would have been proud. What this study did was to map the entire DNA sequence of each chromosome in the organism. Today this has been done on humans as well, and now we have hard solid facts about what makes us tick, and not to mention where we come from giving doctors a better chance to fight diseases like Alzheimer and cancer. Even though the theory of evolution, as revealed in Charles Darwin’s book On the Origin of Species that came out in 1859, was a well-established fact, with empiric evidence supporting if from many fields of science, the Genome Project put the final nail in the coffin of the last god (who turned water into wine) in a long line of dead gods. We know now that that wine probably was a bit sour and spoiled due to our friends the microbes, and possible the perpetrators were Brettanomyces and Lactobacillus.

We can trace our species back in time from a complex human body to what must have been a single celled organism around 3, 7 billion years ago. We can see what genes we share with other animals giving us a clue to how animals evolve, which genes are active and which are not, all thanks to beer, or at least the little bugger that’s responsible for the process that takes place in the fermenter. As the brewer says; the brewer only sets the conditions and the guidelines for the beer. It`s the yeast cells that actually brew it.

So next time you feel like opening the bible or some other religious mumbo jumbo for some moral lectures on other peoples sexuality or sinful behavior, have a beer instead, say a stout. It won`t roast you for your sins, but it might give you a roasted after taste with some hints of bourbon, coffee, vanilla and chocolate, full bodied and a nice buzz. 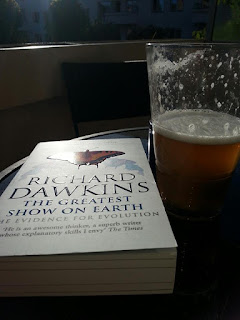