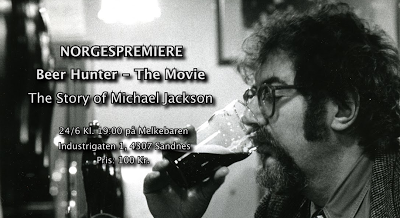 For several years I've heard of the Beer Hunter movie being in the making, I watched clips that were available online, one of the most interesting of them the cab driver clip.

This clip really shows what kind of person Michael Jackson were, and it triggered my curiosity towards this film project that seamed to be never ending. And then one day social media updated me. After all these years finally the film was finished and a screening was set up. Being rather busy myself at the time I called my co-writer Kjetil and told him to get in touch with the director John R. Richards. That resulted in this excellent interview (link) and that again resulted in me deciding to try to get some local bars to screen the movie. You can do the same by ordering a screening DVD here.

So it just turned out that Mikal Tengesdal of Melkebaren in Sandnes were the first to get ahold of the film, and that's how we ended up arranging the Norwegian premiere of Beer Hunter: The Movie - The Story of Michael Jackson at Melkebaren June 24th 2013.

The material I had seen on the net varied a bit in quality, and it seams like the movie had been filmed with several different cameras, no wonder thinking of how many years there were between the oldest and the newest clip. So that put aside I expected a close look on who Michael Jackson really was. I expected something that was clearly an independent DIY movie, a labor of love. Michael passed away in 2007 and there are still movie trailers for this film on youtube saying "coming in 2010" at the end. So I was really curious to see what it had become. And as a lover of independent movies and DIY culture (Do-It-Yourself), I was really into supporting John R. Richards work.

The film starts out with mostly old clips from 2005 and gives you an up close and personal view of Michael as we follow him on his travels around the world, visiting breweries, tasting beers and at festivals. I don't really want to spoil anything for anyone. But we meet a Michael who is somewhat of a character, with his wild hair, witty comments and never ending thirst for beer. Now all that sets the stage for what I would call the "In memoriam" part. Where the movie talks more of Michael Jackson's legacy. There's no denying of the importance of Michael's work and the movie really shows that. You can argue that the quality of the sound mix and image isn't 100% throughout this movie, but that's not what this is about as far as I see it. This is John R. Richards doing the best with what he got from his journeys with and without Michael. Many of the scenes were probably only meant to be published through the Rare Beers Club, online or on cd-rom. So don't expect any super HD.

For a craft beer lover and a beer geek it's very insightful to see this inside look at the world of commercial craft beer brewing. John gives us a behind the scenes view throughout the movie, something that seams very fitting. But even if this movie is about Mr. Jackson it's also a movie about John, who has worked on this project for 8 years now. The 15-minute beer break in the middle of the movie was perfectly timed, so everyone could take a wiz and grab another beer. There's no doubt that the beer world lost a great star when Michael Jackson passed, but I'm very pleased to see the likes of Sam Calagione, Greg Koch, Garrath Oliver & Tomme Arthur paying their respects to this man and his work.

The conclusion from me is that if you're a craft beer geek you have to watch this movie. It's a warm and heartfelt look behind the scenes of the last years of Michael Jackson's life. A man that no doubt lived by the beer and will live on in the hearts of brewers and beer drinkers for decades to come. I would also like to thank Mr. John R. Richards for persisting to complete this movie and never giving up, I can't imagine that it was an easy road to walk. So gather your beer geek friends at a local pub or at the local brewery and arrange a screening. Grab some great beers, maybe some of Michael's favorites? At our screening the beer program was Anchor Steam Beer, followed by Chimay Blue and for the finale Brooklyn Black Chocolate Stout. I think most of the 30 people that showed up at our screening had a really good time cause the atmosphere was great, at the end of the movie the room was filled with applause before everyone went on with their lives. After all the screening was on a Monday...

So how does one rate this? I prefer the simple Roman way: Thumbs up!


Mikal Tengesdal of Melkebaren had the following to say about the movie:

"Beer Hunter Movie: A movie about the last few years in Michael Jackson's life, my opinion is that he was a well respected guy with great knowledge in not only beer but also on whisky. That he also got Parkinson's was new for me and he hid that well, and still he had such a busy life, that was really impressive. I thought it was a nice movie and it was nice to see how well respected he was with the big brewers like Garrett Oliver and Sam from Dogfish among others."


Thanks to Mikal and Melkebaren for being apart of this screening!


PS I want to leave you with this sweet little clip from the film, it will put a smile on your face...